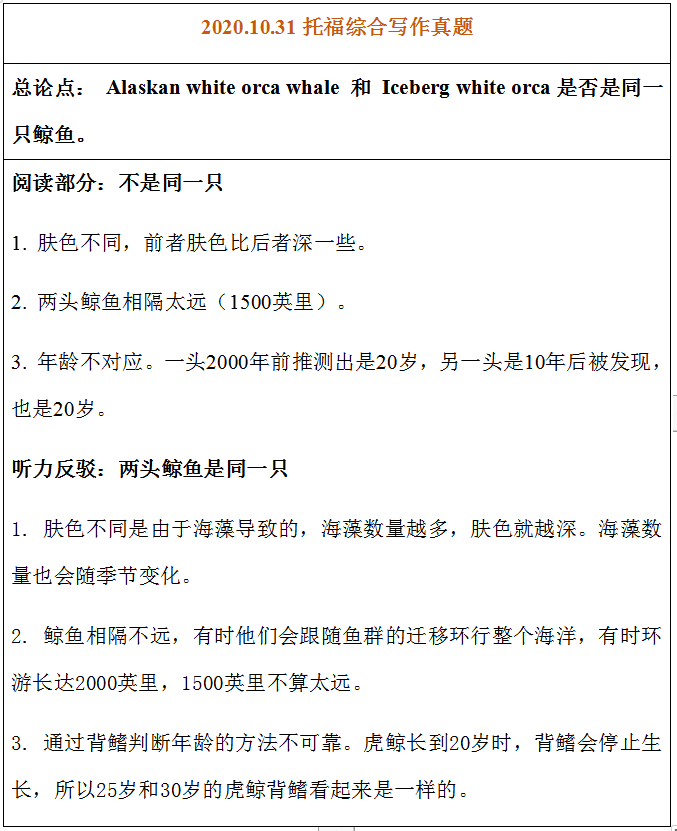 Main idea: Several arguments have been made against powered flight

· Pterosaurs were probably cold-blooded so they would have been unable to generate the energy needed to fly. 翼龙可能是冷血动物，因此它们无法产生飞行所需的能量。

· Pterosaurs that were as large as a giraffe were probably so heavy that they would not have been able to flap their wings fast enough to stay aloft for any length of time. 像长颈鹿那么大的翼龙可能太重了，以至于它们无法快速地拍动翅膀，因而无法在高空停留很长时间。

· We know from fossilized bones that pterosaurs’ back leg muscles were too small and weak to allow the pterosaurs to run fast enough or jump high enough to launch themselves into the air. 从骨骼化石中可知，翼龙后腿肌肉太小太弱，无法让其跑得足够快或跳得足够高，以至于无法将自己发射到空中。

Main idea: Recent research has revealed the pterosaurs may in fact have been capable of powered flight.

· Pterosaurs had a dense, hair-like covering, somewhat similar to fur. Hair or fur covering is typical of warm-blooded animals so they may have the energy needed for powered flight. 翼龙有浓密的毛发状覆盖物，有点类似于皮毛。毛发或毛皮是温血动物的典型特征，因此它们可能有动力飞行所需的能量。

· The bones of pterosaurs were hollow instead of solid, which would have kept the pterosaurs weight low despite their large body frames. The pterosaurs' weight was probably low enough to allow them to keep themselves airborne by flapping their wings. 翼龙的骨骼是空心的，而不是实心的，这将使翼龙的体重保持在较低的水平，尽管它们的身体骨架很大。翼龙的体重可能很低，足以让它们通过拍打翅膀来保持空中飞行。

· Studies indicate that even the largest pterosaurs would have had no trouble using all four limbs to run fast enough or jump high enough to launch themselves into the air. 研究表明，即使是体型最大的翼龙，使用四肢跑得足够快或跳得足够高，足以将自己发射到空中。

In the wake of the rapid development of contemporary society, scientific knowledge has been attached enormous importance to by people from all walks of life. Recently, a heated discussion about whether all university students should take basic science courses no matter what field they major in has arisen. As far as I am concerned, the answer is definitely negative. Admittedly, taking science courses is beneficial to some students. Nevertheless, it is not imperative for all university students to attend such classes.

To begin with, there is no doubt that taking science courses, to some extent, is conducive to students’ future. It is universally acknowledged that scientific knowledge constitutes the foundation of modern technology. Only by having a deep understanding of such knowledge can students know the principles of various electronic devices such as computers and smartphones, which produce a great influence on all sorts of aspects of our lives. As can be imagined, the comprehending of technology is bound to be increasingly significant. In that case, basic science courses taught by professors who excel in certain fields seem to be necessary. Not only will these courses assist students to master more knowledge, but also they may generate unexpected positive effects on their lives.

However, for those who lack autonomous learning ability and those who major in the fields having nothing to do with science, it may be detrimental to their study motivation if science courses become compulsory. Some students cannot even complete tasks of their own majors, not to mention these science courses. It is evident that forcing students, especially those mentioned above, to engage in science classes will lead to extra academic pressure, which is inclined to cause psychological problems to them.

Similarly, for those who know scientific knowledge well and those who major in fields related to science, taking courses about science is totally meaningless. Some students have already been experts in science and may even continue studying physics, chemistry, or other majors concerning science. Chances are that these students will finish tasks assigned by science teachers quickly and manage to do something else in class like playing smartphone games or browsing updates on social media, which is indeed a waste of time.

To put it in a nutshell, I still firmly believe that it is not necessary to ask all university students to take basic science courses. I suggest universities should render science courses elective, which will benefit those who need them most.