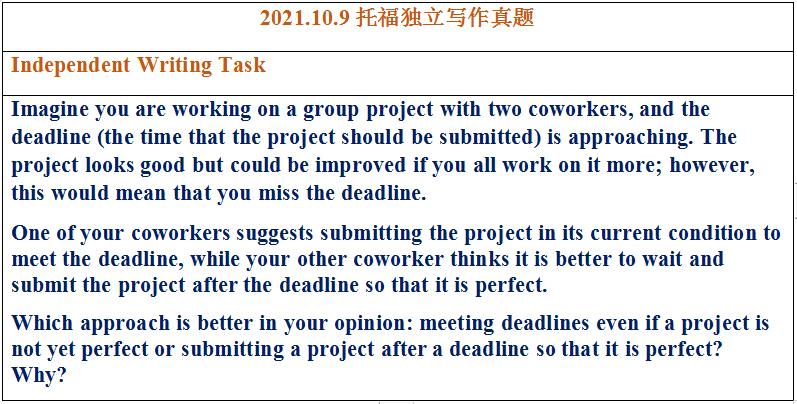 “I wish I had more time!” Many people say so before they hand in their assignments, and I am no exception. This sounds more regretful when a project seems to be almost perfect. However, I still hold the view that it is better to submit the assignment in time, even if some people show a strong willingness to perfect it at the risk of missing the deadline.

To begin with, submitting overdue work is not fair for other groups. One of the reasons why a deadline or other rules are set is that supervisors want to evaluate how well subordinates can handle certain work under restrictions. Thus, how to keep a balance between the completeness of tasks and the time one has is critical to the assessment of one’s competence. In other words, time is also a fundamental element like intelligence or cooperation skills. Under this circumstance, asking for more time is similar to asking for a calculator in math exams while others are not allowed to access it. Once other groups know my group has request for more time and the supervisor permits it, they would be unhappy and some of them may also want more time. Then, those who submit their work in time might get lower scores. It is not fair because those who honor the rules seem to be punished.

Furthermore, trying to polish the project and hand it in after the deadline will disturb both group members’ and other colleagues’ schedules. As is known, every person has lots of tasks to deal with, especially during high seasons. If my group decides to spend extra time on our project, all group members might have to sacrifice an amount of time for it. If someone does not put much value on this project or has too many things to handle, he will be extremely unsatisfied when he knows he has to rework something that he thought he had finished. Similarly, other colleagues would also have to postpone their plans because they need to wait for our project. Then, less time is given to them for their part of work. I think such a quest does not show respect to others’ work and time.

Admittedly, the lure of accomplishing a perfect project is strong and tempting, especially when it seems only a step away. However, I hold that all employees should be treated fairly and nicely. Thus, in this situation, I think handing in the project in time is more important than perfecting the project at the risk of being overdue.